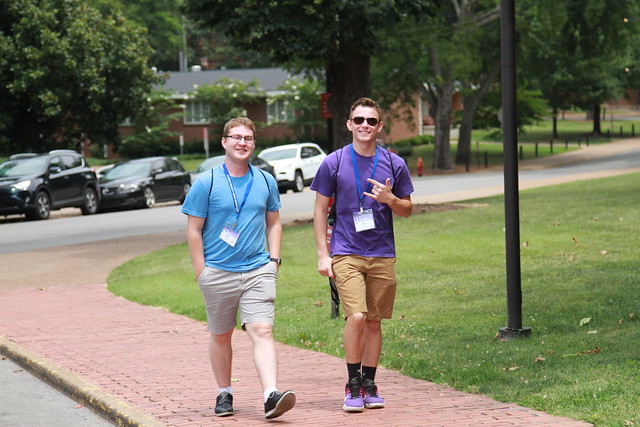 The first Stead Leadership Seminar concluded Saturday, July 29 with a bang. During the day, attendees were able to choose different workshops, aimed to give them new perspectives on leadership.

“I think it [Stead] started a lot of good conversations, between chapters,” said Nick Catalano, Recruitment Specialist. “A lot of chapters have solutions that other chapters have problems with and vice versa. A lot of the facilitation was trying to spark those conversations and to have those solutions come out so they can better their home campus.”

Stead Central ended with the dignified Purple, Green, & Gold Banquet. Brothers were able to enjoy the company of those around them, while reflecting on the events of the weekend.

Among other highlights was keynote speaker Chris Blair, co-founder of one of Nashville’s gems, The Listening Room. Blair had a message of growth and determination in his speech, leaving members with a simple message: “Learn from conflict; learn from brotherhood; learn from your experiences every day. Don’t ever let someone tell you that you can’t do something.”

The highlight of the night for most, though, was the presentation of awards. Though there were many notable winners, the largest awards presented were Feeding America and Grand High Alpha. Winners of these prestigious awards included the following:

The remainder of the award winners will be announced at the other two Stead seminars.

Stead Leadership Seminar, East and West will follow in the coming weeks, staff hoping to provide a state-of-the-art experience once again.

“I’ve been able to connect with a lot of brothers from across the country and really taking in the fact that it is bigger than ourselves,” said Max Grover, Valparaiso University. “We are part of something that is so large and massive, it’s such a great group of guys that share a set of ideals , we all went through the same experiences…it’s been great to connect with headquarters and see that they are there for us and a great resource for us to use.”